​​​​​​BOTH political parties had their share of winners and losers this election, but there was one clear set of losers: the pollsters.

Pollsters greatly underestimated the level of support for President Trump in many states – something that also happened in 2016, but didn’t get fixed.

Polling on Senate races around the country was even more off base. In the Maine U.S. Senate race, for example, incumbent Sen. Susan Collins trailed Democratic challenger Sara Gideon in every major poll. One had Collins 12 points behind. But she ended up winning by a 9-point margin.

The same scenario played out in Montana.

Same for the MSU-Bozeman poll, which gave Bullock a 2-point edge a couple weeks before the election. Likewise, that same poll gave GOP state Auditor Matt Rosendale a 48-46 percent edge over Democrat Kathleen Williams in their congressional contest, but Rosendale won by a 56-44 margin.

One of the few races that a Montana poll came close to getting right was the governor’s race. The MSU poll had GOP Congressman Greg Gianforte leading Lt. Gov. Mike Cooney leading 47 to 42. Gianforte actually won by more than 12 points, but that was still more than the poll's 3,9 percent margin of error.

The MSU-Billings poll had Gianforte and Cooney in a dead heat at 45 each.

From July 1 until Election Day, 17 polls took the pulse of Montana voters, and virtually all of them declared the Senate race a neck-and-neck affair. Some said Bullock was leading by as much as 4 points. Only one pollster, Emerson College, came close to getting a true measure of the sentiment of voters, having Daines up by 6 points in one and 9 by another.

In an interview aired Sunday with GOP and Democratic strategists Ashlee Strong and Eric Stern, MTN’s Jay Kohn asked about the polls. Both Strong and Stern said private polls done for the parties and candidates have been a lot more accurate than public polls, particularly those done by Montana's universities. What's the point, they agreed, in having taxpayers fund polls that have been so far off the mark in several election cycles?

Update: MTN's Mike Dennison has done a story in which he asks how the pollsters "missed the mark so badly." Possible factors, according to the analysts and pollsters he talked to: Many GOP voters are reluctant to talk to pollsters as they see them as part of the liberal media, or the polls used faulty methodologies that didn't adjust for the number of GOP voters there are in Montana. Another possibility: the unexpectedly large turnout worked to the advantage of the GOP -- and wasn't factored into poll possibilities.

UM political scientist Rob Saldin noted that the internal polling done by campaigns was closer to the mark. Still, Saldin said, they were "every bit as surprised – not necessarily in terms of who won, but by the huge margins that we saw the Republican candidates win by.”

BESIDES bombarding Montana readers with political news, five Montana daily newspapers have started to roll out endorsements of candidates for state office. As of Oct. 30, they'd done 32. The most notable thing about them? All but five -- or about 85 percent -- have gone to Democrats.

Conservatives will say they aren't surprised; it is just more evidence of media bias. Liberals -- and journalists -- will say Democrats just have superior candidates this cycle.

In an editorial endorsing five Democrats in down-ballot contests, the Bozeman Chronicle acknowledged that its decision will "bring into question our impartiality and ability to make nonpartisan calls." But it argued it wasn't swayed by political parties but by the need to endorse "the best candidate in each particular race,"​

​In that editorial, the paper endorsed Democrats Shane Morigeau for auditor, Melissa Romano for school superintendent, Raph Graybill for attorney general, Bryce Bennett for secretary of state, and Tom Woods for PSC. The paper also has endorsed Mike Cooney for governor, Kathleen Williams for Congress, and Steve Bullock for the Senate.

Here are the other four newspapers and their endorsements so far. We'll update the list as they continue to come in.

Billings Gazette: Greg Gianforte for governor, Troy Downing for auditor and Matt Rosendale for US House (three of only five Republicans to get an endorsement so far). Also, Democrats Bullock for governor, Romano for school superintendent, Bennett for secretary of state, Graybill for attorney general, and Valerie McMurtry for PSC.

Helena Independent Record: Cooney for governor. Also, Romano and Morigeau, as well as Republicans Austin Knudsen for attorney general and Chrisi Jacobsen for secretary of state, the only other GOP candidates beside Rosendale and Downing to win newspaper nods.

Missoulian: Bullock for US Senate, Williams for US House, Cooney for governor, Bennett for secretary of state, Graybill for attorney general, Romano for superintendent, Morigeau for auditor, and Monica Tranel for PSC.

Montana Standard: Bennett for secretary of state, Graybill for attorney general, Bullock for US Senate, and Cooney for governor.​ 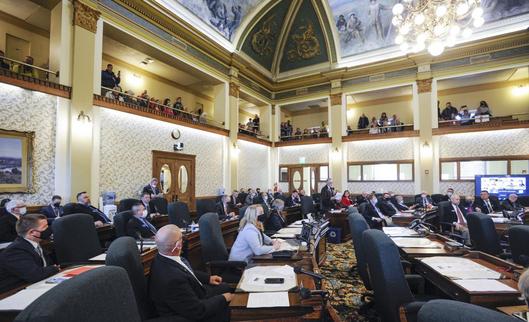 Senate OKs plan to get more checks on assistance programs

2 men wrongfully convicted in murder get $6M each in settlements

Bills aim to alleviate bottleneck of bison at Yellowstone's border

Senate rejects bill that would make PSC an appointed body

Gianforte uses his personal plane, not the state's aircraft

Names of 3 Billings teens killed in crash are released

As legislative session nears its mid-point, bills pile up

House panel endorses 16 bills in session that runs all day

Butte house at center of fight over depth of preservation efforts

Bills that expand wolf-trapping rules on way to governor's desk

MT & the Dakotas were COVID hot spots, then suddenly they weren't

Butte debates what to do with old buildings: Tear down or preserve

Panel moves to cut funding for Boulder facility for disabled

Hunters, landowners and wildlife managers team up to fight CWD

2 men exonerated of 1994 murder get $12 million in settlements

Judge rules for Culbertson in access dispute against Knudsen family

Faucci urges Montanans to get vaccine in UM Zoom talk

Supreme Court upholds permit for proposed silver mine near Noxon

Lawmakers wade into fight over maintenance of Colstrip units

MT firms, others get almost half a billion dollars in PPP loans

Bills would allow MT college athletes to profit from their names

Grizzlies lose again by score of 90-76 to Eastern Washington

Daines should give Haaland a fair hearing as Interior nominee

Legislature must keep caucuses open to public and press

Daines, Rosendale complicit in violence at US Capitol

Author looks at his grandmother's unsolved murder in Butte in 1940

Flathead furrier one of the last of a dying breed

Couple forced into long-distance relationship, tho they live miles apart

Whitefish man ready to take nation by storm -- in steinholding

Indie movie filmed in Flathead to be released Feb. 12

Under the Big Sky Music Festival postponed until 2021​​