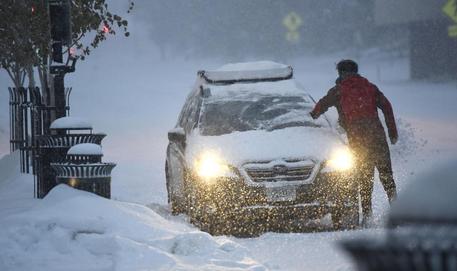 A Bozeman motorist cleans his windshield as the snow flies on Saturday. (Bozeman Chronicle)

Rise in homeschooling could cut funding for Montana schools

Utah man charged with digging for treasure in Yellowstone cemetery

UM students, faculty warned to watch out for bear on campus

Billings mom and her 6 kids all fight COVID-19

Report: Cost of carbon capture project at Colstrip about $1.3 billion

Bozeman woman accused of trying to kill boy, 6, with Ambien

Tester wants to bar any appeal of Pendley's ouster from BLM

Unhappy urbanites flee to new homes on the Montana range

Gianforte loans his own campaign another $4 million

Cooney, Gianforte don't offer a lot of specifics on COVID

State's job recovery has flattened out

In Hamilton, businesses deal with mask mandate in different ways

DeCuire sees a season for UM, but it will be shorter than usual

As does the Missoulian

Standard: Voters should keep McKinnon on the court

Cooney's experience gives him the edge as governor, says Standard

Chronicle: Oppose LR-130 as it would usurp local control over guns

That summer when Steven Spielberg came to Libby to make 'Always'

Whitefish woman paddleboards like crazy in search of inner peace

Some tourists aren't too wild about their Montana experiences

Under the Big Sky Music Festival postponed until 2021​

​​​​​BESIDES bombarding Montana readers with political news, five Montana daily newspapers have started to roll out endorsements of candidates for state office. As of Oct. 25, they'd done 30. The most notable thing about them? All but five -- or 83 percent -- have gone to Democrats.

Conservatives will say they aren't surprised; it is just more evidence of media bias. Liberals -- and journalists -- will say Democrats just have superior candidates this cycle.

In an editorial endorsing five Democrats in down-ballot contests, the Bozeman Chronicle acknowledged that its decision will "bring into question our impartiality and ability to make nonpartisan calls." But it argued it wasn't swayed by political parties but by the need to endorse "the best candidate in each particular race,"​

​In that editorial, the paper endorsed Democrats Shane Morigeau for auditor, Melissa Romano for school superintendent, Raph Graybill for attorney general, Bryce Bennett for secretary of state, and Tom Woods for PSC. The paper also has endorsed Mike Cooney for governor, Kathleen Williams for Congress, and Steve Bullock for the Senate.

Here are the other four newspapers and their endorsements so far. We'll update the list as they continue to come in.

Billings Gazette: Greg Gianforte for governor, Troy Downing for auditor and Matt Rosendale for US House (three of only five Republicans to get an endorsement so far.) Also, Romano for school superintendent, Bennett for secretary of state, and Graybill for attorney general.

Helena Independent Record: Cooney for governor. Also, Romano and Morigeau, as well as Republicans Austin Knudsen for attorney general and Chrisi Jacobsen for secretary of state, the only other GOP candidates beside Rosendale and Downing to win newspaper nods.

Missoulian: Bullock for US Senate Cooney for governor, Bennett for secretary of state, Graybill for attorney general, Romano for superintendent, and Monica Tranel for PSC.

Montana Standard: Bennett for secretary of state, Graybill for attorney general, Bullock for US Senate, and Cooney for governor.​

HAVE ANY idea how much the top one percent of Montanans earn on average? It is $304,000, according to the Economic Policy Institute.

​The state with the wealthiest one percenters is Connecticut, with an average income of $678K. The lowest is Arkansas at $228K.

Among the 50 states and the District of Columbia, Montana ranks No. 37.

How about our neighboring states? North Dakota does pretty well, coming in at No. 6 with the top one percent averaging $502K, probably due to all that oil and gas income. South Dakota is at $404K, Wyoming at $388K, and Idaho at $280K.

ARE MONTANANS some of the smartest folks in the country? Those who like to think so now have some ammunition to back them up.

An analysis by a web site called safehome.org says Montana is the fifth smartest state in the country. It follows only New Jersey, Utah, Massachusetts, and North Carolina. You can find the study at www.safehome.org/smartest-americans/

Surprisingly, the state with with the lowest score was Idaho, right next door to Montana. That doesn't seem to add up, does it? Others at the bottom of the heap were Oklahoma, New Mexico and Arizona.

GOV. Steve Bullock got some valuable air time recently for his presidential campaign. Only trouble is, the exposure was on CNN, which has lost a large portion of its audience in recent years.

Viewership was down 25 percent overall, and 38 percent for the coveted 25-54 age bracket, compared to the average Sunday numbers for CNN from 6 p.m. to 8 p.m.

MONTANA has jumped into the top 10 of Bankrate.com's annual ranking of best retirement states. More specifically, the Big Sky state finished No. 9 -- ahead of states such as retirement havens Arizona and Nevada.

Montana gots its best mark -- No. 2 -- in the culture category, and a ranking of No. 16 in affordability. Its worst ranking -- no surprise here -- was No. 45 for weather. The state also received a 20 in the well category and a 31 for crime.