A group stops to view wildlife in Yellowstone Park in early March. On Tuesday, Yellowstone and Grand Teton parks were closed to visitors in an effort to help stop the spread of coronavirus. (Bozeman Chronicle) 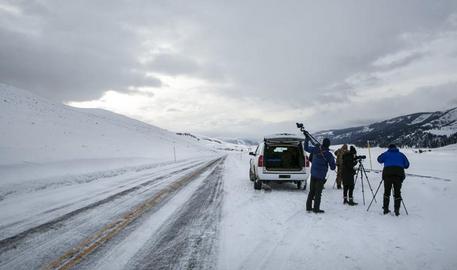 HAVE ANY idea how much the top one percent of Montanans earn on average? It is $304,000, according to the Economic Policy Institute.

​The state with the wealthiest one percenters is Connecticut, with an average income of $678K. The lowest is Arkansas at $228K.

Among the 50 states and the District of Columbia, Montana ranks No. 37.

How about our neighboring states? North Dakota does pretty well, coming in at No. 6 with the top one percent averaging $502K, probably due to all that oil and gas income. South Dakota is at $404K, Wyoming at $388K, and Idaho at $280K.

ARE MONTANANS some of the smartest folks in the country? Those who like to think so now have some ammunition to back them up.

An analysis by a web site called safehome.org says Montana is the fifth smartest state in the country. It follows only New Jersey, Utah, Massachusetts, and North Carolina. You can find the study at www.safehome.org/smartest-americans/

Surprisingly, the state with with the lowest score was Idaho, right next door to Montana. That doesn't seem to add up, does it? Others at the bottom of the heap were Oklahoma, New Mexico and Arizona.

GOV. Steve Bullock got some valuable air time recently for his presidential campaign. Only trouble is, the exposure was on CNN, which has lost a large portion of its audience in recent years.

Viewership was down 25 percent overall, and 38 percent for the coveted 25-54 age bracket, compared to the average Sunday numbers for CNN from 6 p.m. to 8 p.m.

MONTANA has jumped into the top 10 of Bankrate.com's annual ranking of best retirement states. More specifically, the Big Sky state finished No. 9 -- ahead of states such as retirement havens Arizona and Nevada.

Montana gots its best mark -- No. 2 -- in the culture category, and a ranking of No. 16 in affordability. Its worst ranking -- no surprise here -- was No. 45 for weather. The state also received a 20 in the well category and a 31 for crime.

DESPITE making several campaign trips to Iowa, Gov. Steve Bullock didn't win any support in the latest Iowa Poll of who leads in that state among the Democratic presidential contenders.

The poll shows Joe BIden with the lead, with Bernie Sanders, Elizabeth Warren and Pete Buttigieg in a close race for second.

Bullock, who got into the Democratic presidential race late because of Montana's legislative session, didn't garner a single vote. In another part of the poll, 9 percent of those polled said they were actively considering Bullock. But there were 16 other candidates ahead of the Montana Democrat in that category.

Bullock's lack of support so far for his presidential ambitions is threatening his chances of getting on the stage for the first debate. Bullock and Montana Democrats said the rules that may keep him out of the debate are unfair.

MONTANANS enjoy seeing the state at the top of many national rankings, but there's one that doesn't justify much pride: Deaths from drunk driving.

Montana also has a reputation for some of the nation's weakest DUI laws, and the recent legislative session tried to stiffen them. But time ran out on efforts to strengthen the DUI laws at the session's end.

State pushes its school and restaurant closures to April 10

Montana hospitality industry on his heels due to health closures

State employees told to work at home when possible

Bozeman travel students stuck in Peru due to travel restrictions

West Yellowstone woman pleads not guilty in death of grandson

State now has 45 COVID-19 cases, with most in Gallatin County

Felon gets year in prison after posing with gun on Facebook

Gianforte raises $1.8 million for campaign, kicks in $550K as a loan

As of Sunday, state has 34 cases of coronavirus

MT schools may not have to give standardized tests this year

Western Montana Clinic in Missoula lays off scores of staffers

Thanks to those who are helping us get through this crisis

Montana's about to be drowned by dark-money spending

Lots of questions must be answered on utility's Colstrip proposal

Will Montanans remember Bullock's move to left in presidential race?

Daines deserves a lot of the credit for passage of LWCF

Regents have duty to speak up for University System

Montana, Wyoming are right to fight for a coal port on the coast

Montana was shut down by pandemic before

Kenny Chesney to play at MSU's Bobcat Stadium on July 5​​​